Mark Hancock wrote his first book, Pronunciation Games (CUP) in the early nineties. Since then, he has been teaching in Europe and writing materials including English Pronunciation in Use (CUP) and various coursebooks. His latest books, PronPack 1-4 (Hancock McDonald ELT) received the 2017 ELTons Award for innovation in teacher resources, and a runner up award from the English Speaking Union. Mark also uploads free articles and materials on http://pronpack.com and http://hancockmcdonald.com . 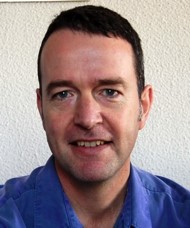 We sometimes dehumanize pronunciation in the way we talk about it. If a learner mispronounces a word, we might say, ‘It isn’t pronounced like that; it’s pronounced …’ (and then we model the ‘correct’ way). In the dictionary, there are transcriptions to tell us how words are pronounced. Talking about weak forms, we might say, ‘In these words, the vowel sound is reduced to a schwa’. On the topic of word stress, we might say, ‘Most two-syllable nouns are stressed on the first syllable’. I’ve highlighted the verb forms above to demonstrate how easy it is to slip into the passive when talking about pronunciation, which is fine, but what it does is conceal the identity of who is doing the action. It doesn’t tell us who pronounces things this way – it removes the human from the equation.

This passive creeps into the very label we use to refer to the prestige accent in the British portion of the English-speaking world: Received Pronunciation (RP). Received here is a rather old-fashioned synonym for accepted, and again it begs the who question: Who accepts this accent?

If RP is the acceptable accent, we may also want to talk about what is not acceptable, and again, we often find the passive creeping in: H-dropping (saying Arry for Harry) is regarded as lazy; Pronouncing TH as F (saying fink for think) is frowned upon. Who regards accent features as lazy or frowns upon them?

This question is perhaps easier to answer for languages which have an academy to resolve questions of what is or isn’t correct. This is the case of French and Spanish for example. It is the academy which accepts this or frowns upon that. However, there isn’t an academy for English, so who does the accepting or frowning here?

Let me suggest a provisional answer: it is the court of public opinion. This is vague, but it may be enough. However, there is one feature which stands out very strongly for me: this ‘court’ only has local jurisdiction – different places have different courts. Let’s look at one concrete example of what this means; in England, public opinion views the pronouncing of R after a vowel in words like car as unusual; in the USA, the opposite – it is the dropping of that R which is marked. Acceptability, it seems, is not universal.

This has implications for pronunciation teaching. Teachers often assume that we should work toward a standard model that is accepted in an English speaking country (such as RP in the case of England). But why would learners be specifically concerned about what kind of pronunciation is acceptable in England? They might have a reason of course (for example, if they are going to live in London), but we can’t assume they do, given that English is an international language. If the English frown upon people saying fink for think, so what? Your learner may have no intention of spending time in England or among the English. Avoiding English (or American) frowns is not a sufficient reason to teach anything.

Jennifer Jenkins, in her book The Phonology of English as an International Language (OUP 2000), was right to suggest that the elevation of English to world lingua franca status has major implications for pronunciation teaching. As a lingua franca, English is no longer ‘owned’ by the people of any country – it is the ‘property’ of all. This means that the court of public opinion is now global. Nobody has the right to judge whether somebody else’s pronunciation is acceptable or not. There are no centrally determined ‘standards’ any more. It no longer makes sense to talk about whether a pronunciation is ‘correct’ – what matters is whether it works or not. If somebody expresses an opinion starting with ‘I fink …’ and the other person understands perfectly, then it has worked.

Teachers may object to the toppling of standards such as RP or General American (GA) on the grounds that there is nothing to replace them with. But perhaps we don’t actually need to replace them – in fact, it’s worth considering whether they were ever effectively models the first place.

Firstly, let’s consider it from the learner’s angle. Learners studying in a system which takes RP or GA as a standard rarely come out with that accent themselves. Learners usually come out with an accent which is all their own. This will usually have clear traces of their L1 or other previous language learning experiences, but this does not necessarily make their accent less effective than RP or GA in a global context.

Secondly, let’s consider the teacher’s perspective. The majority of English teachers world-wide do not themselves have an RP or GA accent, and obviously, these teachers will be modelling a ‘non-standard’ pronunciation (unless they are capable of faking a standard accent for the duration of the lesson). This has always been the case, even when there was a pretence of RP or GA being the model. In reality, then, ‘toppling the standards’ is actually discovering the virtue in necessity. If a teacher is an effective and intelligible speaker of English, it doesn’t matter that their accent is ‘non-standard’.

Returning to the beginning of this article, I suggested that we are dehumanizing pronunciation when we fail to acknowledge the who in expressions like ‘it’s pronounced …’, ‘It’s reduced to a schwa’ and ‘It’s frowned upon’. These expressions set up an arbiter of correctness by stealth  – a court of public opinion which is usually English or American. To humanize pronunciation is to be open and honest about this, for example, ‘That’s the standard pronunciation in England, but I pronounce it differently myself’, or ‘English speakers often reduce this to a schwa, but it’s perfectly intelligible if you don’t’. If your learner asks, ‘Yes, but what’s the correct pronunciation’, you can explain that people pronounce it in a variety of ways and they’re all correct.

Humanizing pronunciation models is changing the way we talk about them, but it is not taking the attitude that ‘anything goes’. You will be serving the learner badly if you leave them unaware of pronunciation habits which are likely to make them unintelligible in the wider world. An example of this would be a local L1-influenced pronunciation which is not very common globally, such as the Spanish /b/ - /v/ conflation, the Brazilian way of replacing an initial /r/ with an /h/, or the Japanese conflation of /l/ and /r/. More generally, there are plenty of potential problems caused by spelling-induced pronunciation, such as saying bear so that it sounds like beer. This is perhaps the only aspect of pronunciation in which it is truly appropriate to talk about ‘error’.

I would like to conclude this article with five short observations about models in pronunciation teaching which are implied by it:

Jenkins, J. (2000) The Phonology of English as an International Language Oxford, OUP