Graham Strouts comes from Hampshire in southern England. He spent 25 years living in Ireland working in forestry and landscape gardening, and teaching horticulture before getting on his bike and cycling across Europe in 2017. After completing his TESOL certificate in Barcelona, he arrived in Bratislava to teach English for the Bridge Language School. He enjoys most kinds of humour, including pulling funny faces and making annoying puns, and is a firm believer that learning is best done when laughing. 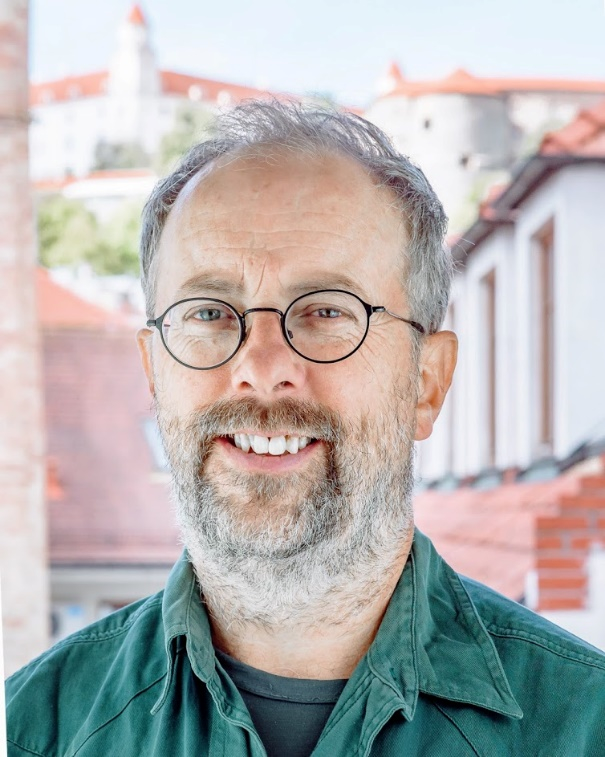 The psychologist and author Edward de Bono once claimed

"Humour is by far the most significant activity of the human brain. What the joke displays is a switch in perception. This is important in changing the way we think.”​ (Guardian interview, 2007.)

Humour plays an essential role in English language teaching, partly because language changes the way we think and perceive the world. In one of the few textbooks dedicated to using humour in the classroom, Laughing Matters ​          ​(Medgyes 2002), Peter Medgyes states that “humour is one of the best vehicles for language teaching and its motivational value cannot be overestimated!”. At the same time, he laments the relative dearth of course materials available on the subject:

“The reason why humour is in short supply is hard to understand, especially since the​ foreign-language class easily lends itself to humour; it is in fact an ideal arena to create a congenial atmosphere.”

Few ELT course books deal with humour as a distinct topic, and teachers may often be ill-prepared to address this issue in the classroom. Kovar (2017) reported that even advanced learners expressed frustration at the lack of a specific focus on humour, which is an essential pathway into understanding another culture.

While humour can be found all around us in authentic materials, there are challenges which may deter some teachers from exploiting it in the classroom. Humour doesn’t always translate easily, it can cause offence to some people, and is often a matter of taste. Here, I will describe my early experiences of using humour in English teaching and point out some potential banana skins, while suggesting some of the roles humour can play along with some practical suggestions.

During my TESOL training in Oxford House, Barcelona, in 2017, I told my supervisor that I wanted to try humour as a topic in my class of advanced adult learners. “Are you sure?”, she said. “It’s a difficult topic. I suppose you are aware of the pitfalls - a joke isn’t funny if it has to be explained.”

I had certainly considered some issues that might come up, such as cultural differences, and how the funny side of things can easily be lost in translation. However, I saw all these as worthy discussion topics in and of themselves, and persevered with my lesson plan.

Unfortunately, I began by making a fatal mistake in my warm-up exercise: “Today, we are going to talk about humour”, I began. “To start, I’d like you to discuss in pairs what makes you laugh, and to tell each other a joke.” Somewhat reluctantly, unsure of what was expected of them perhaps, the students began their pair-work, but two gentlemen beckoned me over.

“We want to tell you a joke,” ​they insisted.

“No, no”, I explained, feeling that I had missed a chance to ask some CCQs (concept checking questions), “I want you to tell each other a joke, and then share it with the class later.” ​            ​But they were persistent - “we want to tell YOU a joke!” ​         ​So, reluctantly, I squatted down in front of their desk only to be told, and much to my consternation, a ‘dirty joke’ definitely not suitable for class sharing. Needless to say, I cannot repeat it here either; other than to say it involved Henry Kissinger and his wife. This cautionary tale shows that it is always good to know your students, especially for this topic.

If unsure, you could start with a general discussion and explain that certain types of humour are taboo in some situations, including in English classes. With adult students, you can lay down the ground rules about dirty jokes ​   ​early on, while exploring appropriate and inappropriate uses of humour. From this, the discussion will lead naturally to an exploration of cultural differences and personal taste. Humour, perhaps even more than beauty, lies in the “eye” of the beholder. (Or, as some wag put it: in the eye of the beer-holder​    ​). Cultural and individual notions of what is funny differ widely.  For instance, the Germans are known for their dourness, and the English are notorious for their dry sense of humour. On a visit to Finland some years ago, I was told that the Finns have only one joke:

Q: Where is it better to live, Finland or Sweden?​

A: Sweden, because the Swedes do not have Russia as a neighbour.​

While this is an example of a very specific context, navigating cultural references can be tricky from a language perspective. In a class discussion concerning food and restaurants, a Spanish student happened to ask me “Do you ever call people ‘a pork’ in England? It’s very common​          here.” ​It took me a moment to realise that she meant pig, ​           ​the animal, not pork, ​ ​the meat, but explaining why I found the idea of calling someone a pork ​    ​so amusing in English (‘YOU BACON SANDWICH!’) was not so easy.

As far as I am aware, in all languages, a lot of jokes rely on double meanings known as puns. Here is an example. A man was asked what he wanted on his pizza at a Zen Buddhist​    restaurant. He said: “Make me one with everything!” ​To appreciate this joke requires not just grammar and vocabulary, but some cultural knowledge of both Zen Buddhism - the transcendental goal of becoming “at one with everything” - and ordering a pizza - “I’ll have one with everything”, viz., olives, anchovies, mushrooms and extra mozzarella.

If this explanation has spoiled the joke for you, then perhaps my teacher trainer was correct about jokes falling flat if they have to be explained. In my experience though, a student will just as often break into a broad smile when the penny drops, providing both amusement as well as the deep sense of satisfaction that goes along with language comprehension.

A more common issue is that not only do people experience humour differently, but some people profess not to experience humour at all; at least in the form of jokes. While this is often just an expression of shyness, for those of us not quite so po-faced, humour can be found (nearly) everywhere. The English language classroom should be no exception and here humour can play many important positive roles.

First of all, humour can help create a more relaxed atmosphere, put the students and teacher at ease with themselves and with one another; thereby reducing the stress often associated with formal learning. (Azizinezhad & Hashemi 2011). For effective learning, students need to enjoy what they are doing, and laughter and amusement can go a long way towards creating these conditions. For insecure students, or for those who lack confidence, humour can help break the ice and create a safe atmosphere which encourages more effective participation. In many ways, language learning involves stepping out of the familiar, out of your comfort zone, and humour can make this much easier to achieve.

In addition to all this, humour can provide content and form to a language class, including a wide range of cultural contexts, along with syntax and vocabulary (Bell, 2009). It brings students closer to the language in a very practical sense, and can help them feel much more comfortable in navigating everyday encounters. Awkward social situations can be diffused through the use of humour, and advanced learners may benefit greatly from developing such skills.

Another function of humour in teaching is in developing critical thinking skills. Recognising the difference between “fake news” created to deliberately fool people, and satirical news outlets such as The Onion, ​ ​or the Irish Waterford Whispers, ​     ​could be an invaluable skill that might, however, require a lot of expertise in the classroom.

Peter Medyes’ book, mentioned above, has hundreds of exercises around humour that can be used in teaching, and is probably hard to beat as a resource. Here are a few basic ideas I have used that might help you get started:

There is no shortage of materials and resources to choose from in the world around us. Scenes from the US TV series Friends ​ ​being a perennial favourite. I often show the clip of Joey failing to understand “air quotes” on body language in my classes. A famous scene from the British comedy film Life of Brian ​          ​with Brian writing “Romans Go Home” all over the walls can create one of the most thrilling grammar lessons ever. The 1980s British satirical show Not the Nine​     O’Clock News ​has a sketch in which a highly educated gorilla outdoes his David Attenborough-like trainer - “Wild?!- I was livid!!”  ​     ​Whether students find these examples humorous or not, they do provide rich pickings for language learning opportunities.

Teaching is a challenging profession and it always pays to keep a sense of humour. In these extraordinary times, humour in the (virtual) classroom may be more important now than ever before.

Kovar, Glen, "Falling Up: Building Language Use and Cultural Awareness Through the Implementation of Humor in the ESL Classroom" (2017). Master's Thesis​       ​. 249.