A School Day in a Village in Nepal

Annette Kurz has been a teacher of general and business English in adult education for more than 20 years. She works free-lance in companies and at adult educational institutes and registered with the SES (Senior Experten Service, Bonn – a charity open to everyone who wants to work as a volunteer at home or abroad) after spending an inspiring holiday in the north of Thailand some years ago, giving rise to the wish of going back to Asia to teach. This year the call finally came with the offer of going to Nepal as a volunteer, spending four weeks in Amppipal to train the teachers in both language and methodology. It was an adventure and, especially at the human level, a very rewarding task. E-mail: kurz.bruehl@gmx.de

It’s a steep climb up to Janata English School in Amppipal – or down, or up and down depending on where you live. Many children walk an hour or more to school so that lessons don’t start before 10 am. 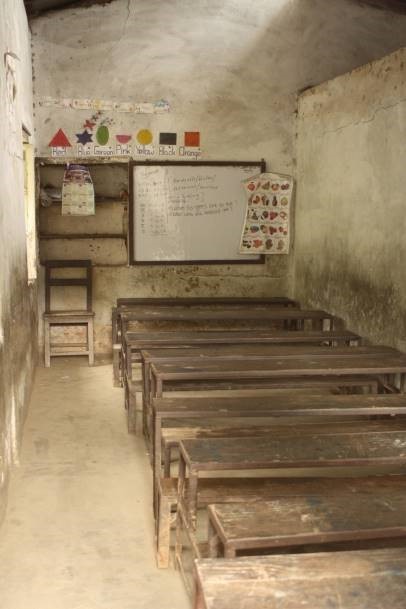 Janata English School is a state school in the foothills of the Himalayas at about 1300m elevation, roughly half way between Kathmandu and Pokhara, but to the north of the main road connecting the two cities best-known outside Nepal. The 120-km drive took the jeep eight hours – there was an accident on the road and only one lane open. But also in ideal circumstances, it cannot be done in less than four hours.

Everybody has to be there at 9:45am for General Assembly. The pupils are divided into two groups because there is not enough flat space in front of either the stone school building or the makeshift classrooms further down the hill. These look more like barracks, made entirely of corrugated iron, with a whiteboard and old wooden benches inside. Since the earthquake in 2015 the school has not been able to use its main stone building any more – it’s still standing but with cracks in the wall, too dangerous to let anyone go inside, let alone hold lessons in it. 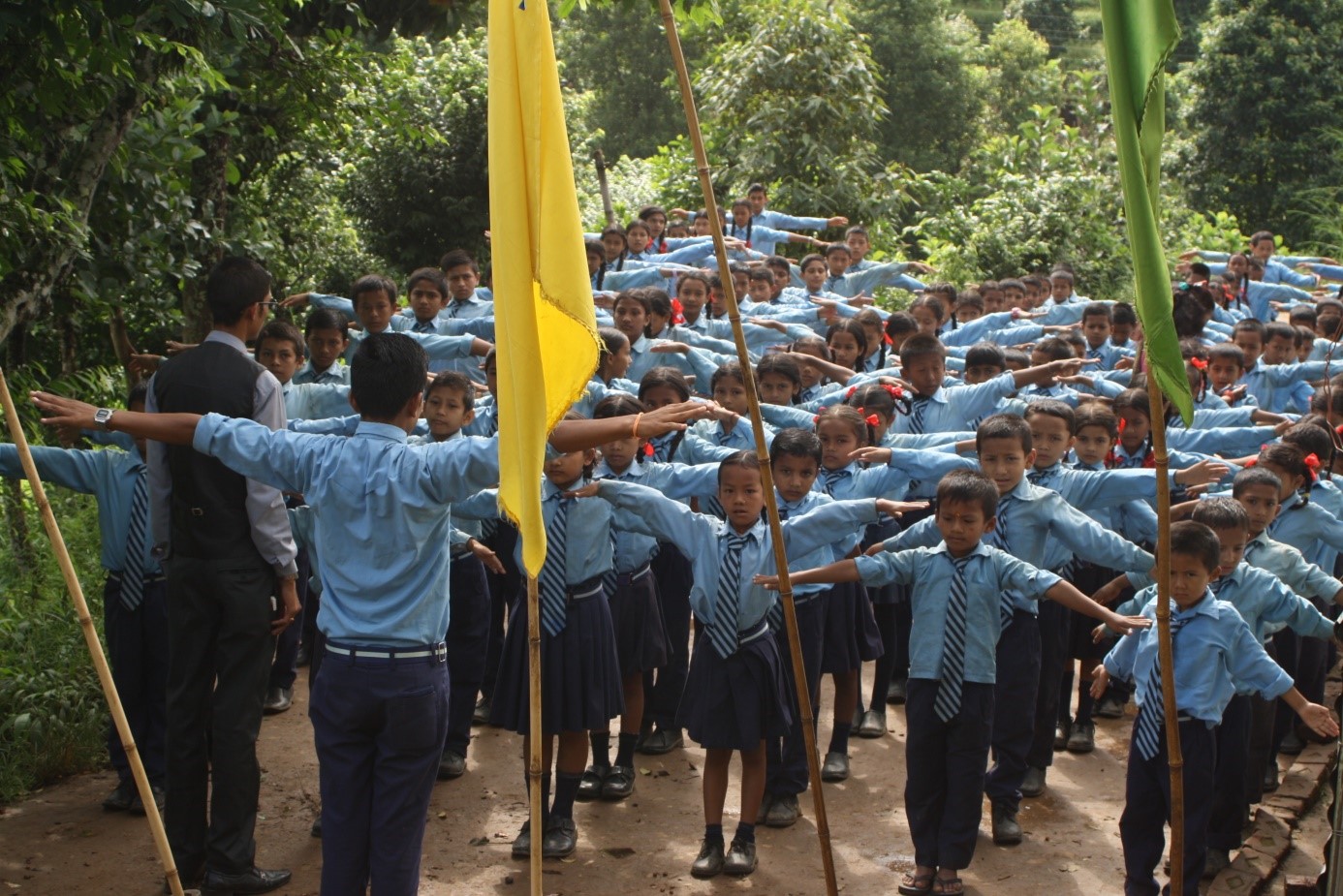 The pupils stand in exact rows one behind the other, the younger ones under the roof in front of the stone building up at the top, the older ones in the larger ground further down, next to the “barracks”. The teachers check the rows and the uniforms – light-blue shirts, dark trousers and striped tie for both girls and boys. Then one of the older students stands facing the bigger group and gives commands: “Attention”, “arms up”, “arms side”, “stand easy” – up at the top another student with a view down onto the ground imitates his movements so that the younger children standing in rows behind him can do the same thing. After what they call “exercises”, there comes the National Anthem. The students stand with their right hand firmly on their hearts and sing, sometimes accompanied by music when the old loudspeaker is not on strike and there was enough time to set it up in the first place. This is followed by more bellowed commands, then they say a short prayer and sing what they call the “national song”, another patriotic piece of music. By this time at the latest, upper and lower level are not in sync anymore which produces a kind of echo effect – and the younger students have a tendency to sing the songs more slowly anyway. They are reunited for another round of physical activity before a student steps up to the microphone and says something in Nepali that I, of course, can’t understand. The other students clap their hands, sometimes more, sometimes less enthusiastically. As I find out later, these students (each day a different one) recite a poem or give their classmates some quiz questions to answer. They are meant to practise speaking in public and in front of others that way. Then it’s "left, right, left, right" marching into their classrooms, one behind the other, swinging arms vigorously. That is, except for some of the younger pupils who had to watch the ceremony lined up along the wall, with their arms folded on their chests and their right hand holding their noses – they had arrived late and were thus disciplined in order not to forget to be punctual the next day.

Meanwhile the teachers retrieve books and pens from the teachers’ room on the first floor of the stone building. Each teacher has a locker in a cabinet for his lesson material, there are two wooden tables in the middle of the room with plastic chairs to sit around it and a separate desk and chair in the back of the room for the headmaster. Space is at a premium. 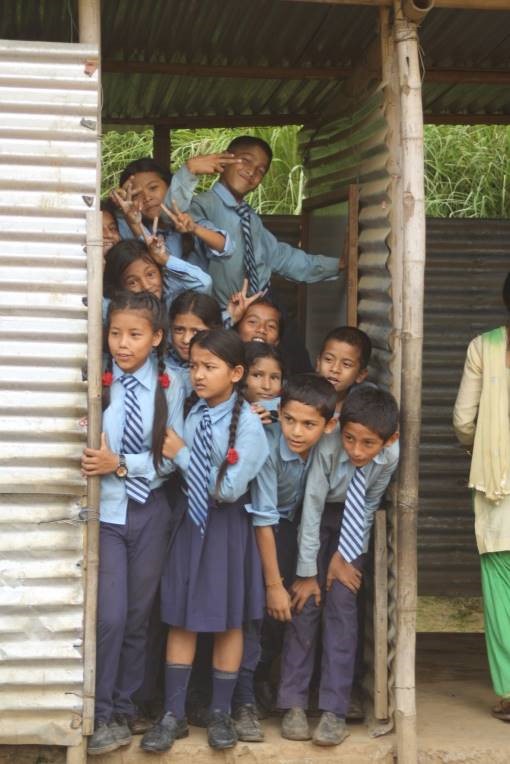 The students have settled into their classrooms and are waiting for their teachers. One or two classes will go without as there is a shortage of teachers even on normal days; the students will then copy texts from a course book into their exercise books, doze or talk with their neighbours. If they are too noisy and sit in the “barracks” a teacher from a neighbouring class will quickly come over and restore discipline (which in general is good, given the circumstances) and give them a new assignment. Lessons last 40 minutes each, then teachers go to the next class.

When the teacher enters the room, all the students stand – and rather quickly, given that the benches are really narrow, especially for the older pupils. “Good morning, Sir/Mam” resounds the chorus; they will not sit before you tell them they may. Students also stand whenever they answer a question or read from a book and again, remain standing until you tell them to sit (I forgot on occasion and only noticed when I had three pupils standing simultaneously, looking at me with a question mark on their faces). When someone wants to leave the classroom to go to the toilet, they ask, of course. But they also do so before coming back in. “May I come in?” is the general question before entering a room in which a teacher is present (this was also done by the teachers when I had my classes with them). And then the students really wait to be asked inside – which gives the teacher the time to clear his things in peace and quiet or get ready for a lesson before allowing the class inside after break time or in the morning. 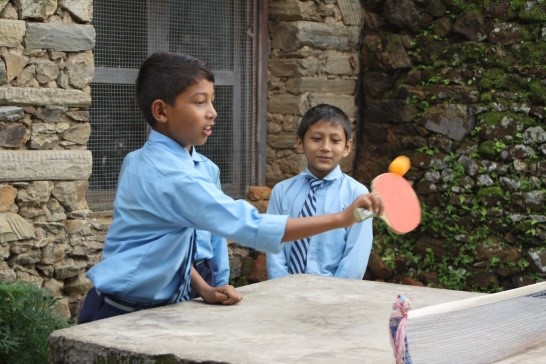 As the students don’t have to move from one classroom to another, breaks between lessons are short, and it is quite a long morning until 1:30pm when there is half an hour’s lunch break. The children love to run about during that time, make good use of the stone slab designated for table tennis or eat dry noodles from little packages that are probably meant to be stirred into hot water but which they nibble raw as they are. Nobody has what we would consider a “packed lunch” and the school only provides something to eat three times a week: then the pupils line up under the roofed yard to be given a banana, an apple and a hard-boiled egg each, courtesy of the German charity that also sponsors 25 children’s school fees and pays two of the teachers’ entire monthly salaries. And still they earn so little that there is a big tendency to look for work in Kathmandu or abroad – where in most cases they would not be able to work as teachers, given that most of them go into the profession without a university qualification, the headmaster being the only exception with a BA in Maths. Once they are in their first job here, they do distance studies to get some certificate and only go to a bigger place and the college or university there to take an exam. Their families simply cannot finance a course of studies away from home. As a result, most of these very young teachers have not had any training in methodology or classroom management, a lesson plan is an unknown concept, teaching is very often along the lines of “please open your books on page … and read”. And yet – the pupils are so eager to learn, do their best to concentrate in truly adverse circumstances and could certainly do well, given the chance. They leave Janata English School after their form seven, at the age of 13 or 14. Whichever school they attend after that, state or private, will charge fees – and they will have to be boarders, so inconceivable without help from abroad. 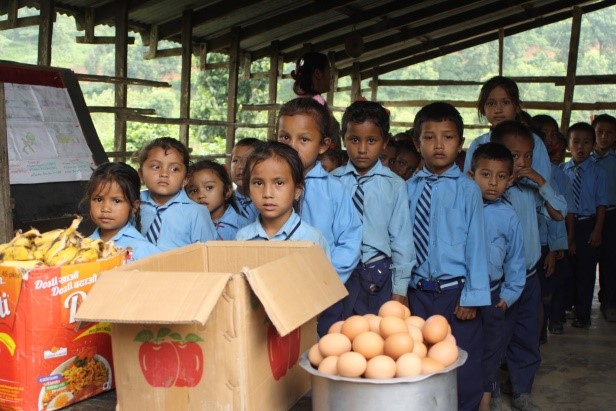 More lessons in the afternoon until 4pm, sometimes interrupted by a little race when concentration vanes – there are no official sports or music classes. 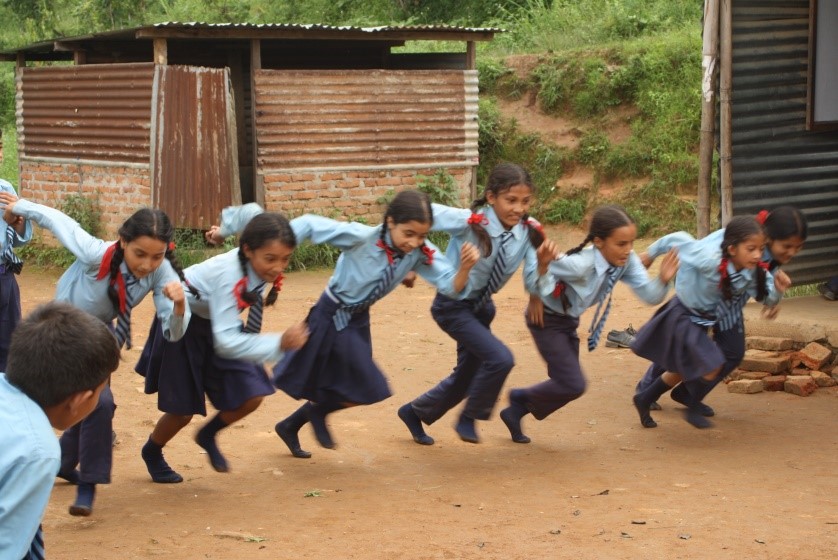 The youngest children are then met by their mothers and for the others it’s the long way home again, where they will help with the laundry, feeding the chickens and goats and maybe study a bit until it gets dark at just after seven o’clock when everybody turns in and reads and talks by the dim light of a bulb dangling from the ceiling. When the cocks crow again in the morning, there’ll be another round of study and play – for those who can afford to go to school.