The Plague of Eyam Village: Writing and Illustrating for BBC TV 1966 to 1969

My first television work in England was for BBC North.  It was in 1966.  I knew the tercentenary of the Plague of Eyam village in Derbyshire was coming up so I wrote to BBC North and asked them if they would like an illustrated piece from me on this tercentenary.  They showed interest and I sent them a storyboard of the kind I had developed in my work for WDR (West Deutch Rundfunk). They agreed to take my four minute slot.

My memory is that they didn’t offer me a fee but I was glad to do it because it was interesting to do and might help to establish my name.  I had caught on to the latter being a ‘good idea’.

For those of you who don’t know, this was the last major outbreak of the bubonic plague in England.  It was one year after the devastating plague in London and the plague ridden fleas are thought to have come from London in a delivery of cloth for the local tailor.  The village people volunteered to stay in Eyam rather than leaving and spreading the disease; two thirds of the village population died during the following year.

Here are a few selected from the twenty or so pictures used in the story. 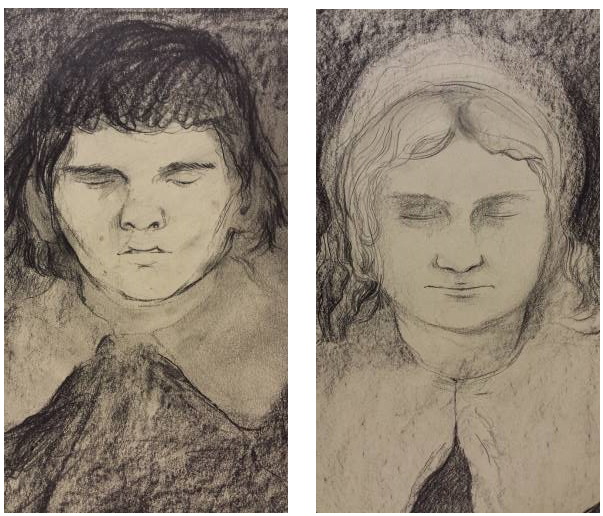 I began the piece by bringing up on the screen a face and then slowly mixing it with another face.  As each face came into focus I read out the names of the first ten people to die in Eyam with the date on which they died.

This man has dropped to the ground, twisted with the pain of the spreading tumours.  His legs are, anatomically, just beyond the feasible but I wanted to express the torture he was in. 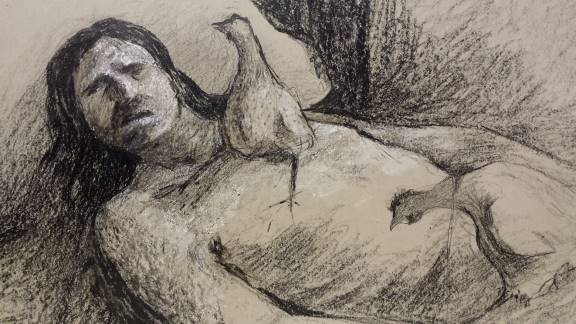 My research into how the plague was responded to revealed that one technique was to pluck the feathers from live chickens and then to tie the plucked birds on top of each of the tumours.  The belief was that the evil would flow in to the live chicken.  The thought of the pain for the chicken and its clucking and cackling mixing with the pain for the man, his moaning, crying and shouting, and his knowledge that he would be dead within three days is still a nightmare for me now, all these years later. 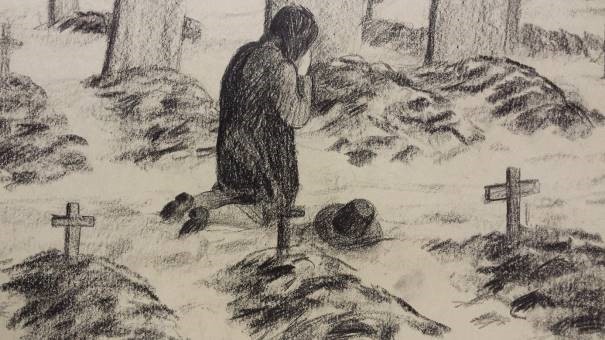 Whole families died out with no one left to make their gravestones. 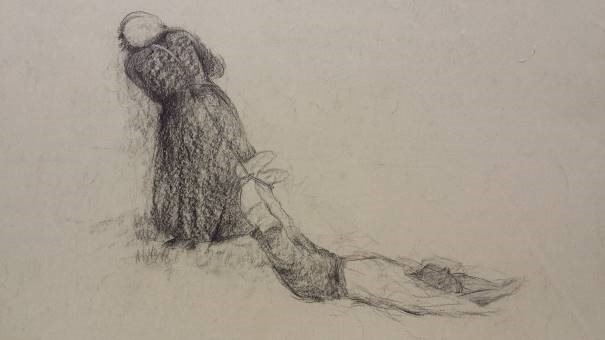 And for many people there was no one left to help to take their family members to the churchyard and they were left to drag them into the nearest field and to bury them there.  They then dug their own grave and sat in it waiting to die.

Wesley preaching in Outlane a village in the Pennines

Some kind of commemoration came up associated with John Wesley, the Methodist preacher, and the village of Outlane.  The BBC, having just broadcast the Eyam story, asked me to provide about ten illustrations to show Wesley visiting Outlane, which was known to be a wild area.  Having read parts of Wesley’s biography, it seems that people were pretty wild everywhere at that time, ie. The mid-eighteenth century - a mixture of poverty and religious fervour and intolerance.  But Wesley believed in going to the people and telling them how close they could be to God.  He was an entrancing speaker, using short sentences which seemed to move the ‘common man’.

Brushing his hair back with his hand, the face he presented to his hearers would fill them with awe, and he used his eyes in such a way that each felt that they pierced him alone, that his words were meant especially for him. He seems to have exercised a sort of hypnotic influence on his audiences. Perhaps he was conscious of this power, and liked to use it, for God had given it him to convert with, and convert he would. For though he might speak the words of humility as much as he liked, the spirit of pride was there, pride that he had been chosen to do this work. And perhaps also the hysterical displays satisfied his hungry emotionalism, cheated by his failure to love and to be loved humanly, a longing he professed to have eradicated. And above all he could rule, rule in hell while serving in heaven. His doubts vanished, his fits of unhappiness disappeared.

Part of the cameras wandering

….the possessed rabble impelled Wesley up and down the streets, and across the river, shouting “Knock his brains out! Down with him! Kill him at once! Drown him! Hang him on the next tree!” and even “Crucify him!” Somehow he survived with no further damage than a flap of his waistcoat being torn off, mercifully not the one with papers and money in it. When he tried to slip in to the door of a house that he saw stand open, they dragged him out by the hair. He was hit twice, but both blows were as nothing, “for though one man struck me on the breast with all his might, and the other on the mouth with such a force that the blood gushed out immediately, I felt no more pain from either of the blows than if they had touched me with a straw.” Going down a slippery hill, many tried to push him over, but he knew that if he fell he would never get up again, so he did not even stumble. Angels, Charles recorded, held him up. A lusty man behind him struck at him several times with an oak cudgel, a knock from which would have meant death, but every time the blow was turned aside; how, Wesley did not know. Another man came rushing at him through the press, and raising his arm to strike, suddenly let it drop gently, and stroked Wesley’s head, saying: “What soft hair he has!” The scene is typical of many which went on through years, down to the final act of the magistrates who had refused to see Wesley: they issued a warrant for his arrest on the charge of raising routs and riots!

Mrs Gaskell was a Victorian author and lived in Manchester.  She died in 1865 so I don’t think that was why BBC commissioned me to tell her story.  Her house in Plymouth Grove was given to Manchester University in 1969 and that is the more likely reason…that just about dates my memory of it.

I did some rudimentary research and from this decided that my theme would be the contrast between Mrs Gaskell’s very privileged background and her experience of poverty in a great city in the nineteenth century, which then influenced her novels.

Her experience of the industrial metropolis of Manchester was more than a passing taste of it.  Her husband was a Unitarian priest and worked with the poor; her husband held welfare committees and tutored the poor in his study and visited their homes. Mrs Gaskell was involved rather than a mere, occasional observer.

Mrs Gaskell was recognised as a significant author by fellow writers:

‘Poets, patrons of literature and writers such as Lord Houghton, Charles Dickens and John Ruskin visited Plymouth Grove, as did the American writers Harriet Beecher Stowe and Charles Eliot Norton, while the conductor Charles Hallé, who lived close by, taught piano to one of their daughters.

Elizabeth's close friend Charlotte Brontë stayed there three times, and on one occasion hid behind the drawing room curtains as she was too shy to meet the Gaskells' other visitors.’

I began the story with pictures of her fine house, tea-room parties and other pictures of middle-class life at the time. 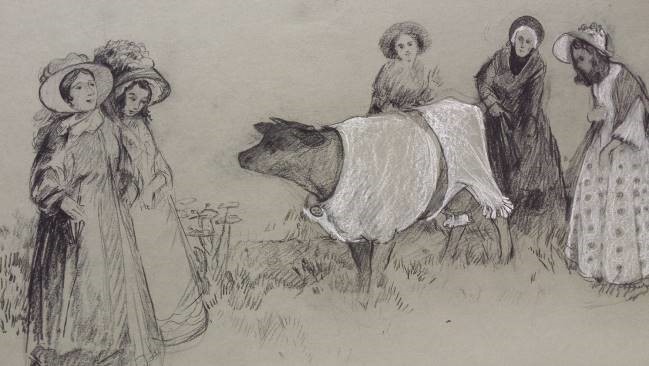 Elizabeth recounts how she and her lady friends dressed up a cow in their underclothes and had such a laugh. 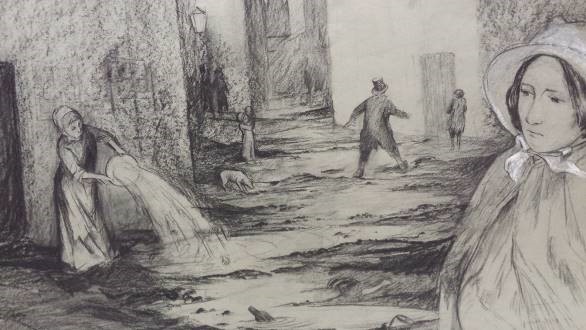 This picture is designed to introduce the idea of Mrs Gaskell going in to the city and seeing at first hand the deprivation of the people living there.  I designed it so that the camera would zoom in to Mrs Gaskell’s face then pan left to the woman throwing her slops into the undrained street.  Dogs and children in this muddy, stinking environment. 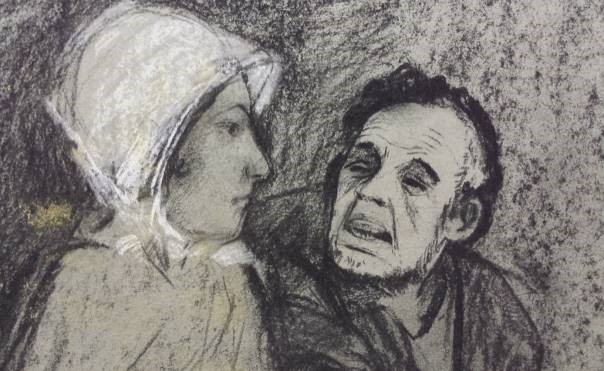 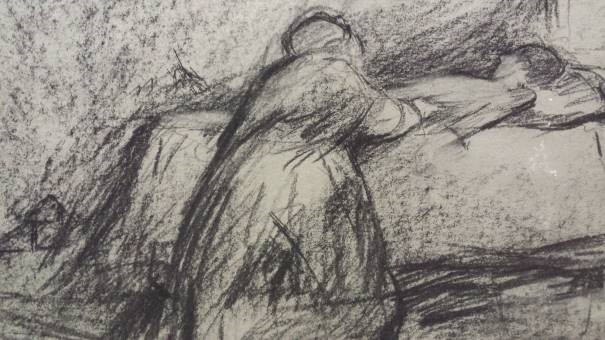