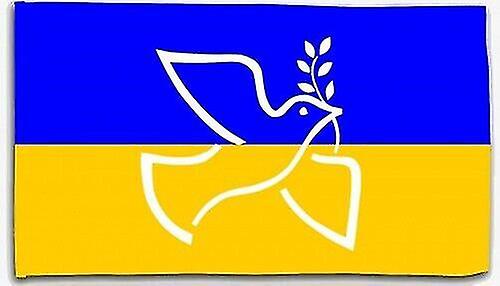 I was born two years before the outbreak of WW 2.  I grew up in the shadows of war: the air-raid sirens, the nights sleeping in shelters, the shattered glass in the mornings after the bombs, the fear ...and my father away at sea.  Now children are being subjected to far worse than this. How can this be?

I am sure that you, like me, are feeling a complex range of emotions over the events in Ukraine: rage, compassion, revulsion, pity, impotence, fear, incomprehension, apprehension, despair …

Depending on where you are in the world, you may already be taking what action you can to help – through cash donations, collecting and dispatching medical and other supplies, putting pressure on your government to welcome refugees displaced by this insane conflict, etc.

I have suggested something which would show our solidarity with the Ukrainian people - and indeed with the Russian people too, who are suffering the consequences of actions most of them had no part in initiating.

We have all contributed some  poem texts focusing on reactions to the current crisis. These texts are either own original work e.g. Rod Bolitho or already published work by others, e.g.  Wilfred Owen.

In case you feel collecting poems is a futile gesture, just consider this quote from Edward Everett Hale

‘I am only one, but I am one. I cannot do everything , but I can do something.

And I will not let what I cannot do interfere with what I can do.’

The Ukraine Collection  is nearly 200 pages long!  The full collection can be obtained by mailing Alan Maley on yelamoo@yahoo.co.uk

When men deranged and warped by power

Lose all control and seize the hour?

When our world is swamped with lies?

A little part of all of us just dies

When those lies are voiced and widely spread?

That’s when we start to count the dead.

When evil and mendacity prevail

And we look on and all our leaders fail?

To those brave enough to challenge and refute the lies?

The men in black appear and take them by surprise.

Oh, we know too well what happens, and yet ….

What of these tyrants and the men in black

Who cruelly rule the streets and squares

And simply hope that no-one cares

As they prepare each new attack?

Should we just stand aside and fret?

So shall we just devote each day

To putting in our online orders,

Hoping all this will be resolved

Without a need to get involved,

Just trusting that our island borders

Will keep the vileness far away?

But deep down, we all know so well

That this is no Frostian forked way

Offering a choice for us to make.

Instead there is a path to take

If beliefs and values are to stay

In memory of the Ukrainian dead at the hands

We walk amongst thousands of names

in a Sorian graveyard and stop to read

from Associations and Government

freshly laid on her tombstone, the poet

buried in Colliure speaks his lament

with iris and rose picked from the plot

by the Duero, where the poplars unbent

With lovers’ names, shapes as dates,

grow out of its waters along with hill

and verge, a world downsideup, states

of disarray, a silence before the kill,

cities under siege, bodies stacking up,

another exodos from far off Ukraine

where life withers beside a buttercup

as the river brings in a slanting rain

And we ascend to the warm Parador

named after the poet, our fingers

in a love-knot for the climb to our

food and wine, and coffee outdoors

in the evening chill makes us almost

forget the moment we are living in,

but not so my dreams of a ghost

with thousands of names and one.

When will they ever …?

When will they ever learn?

When will they ever stop?

Is it in our DNA?

The massacre of the Innocents…

But as it does, it opens sores.

Yet, as the bully achieves its goal,

It visibly forfeits its soul.

What passing-bells for these who die as cattle?

— Only the monstrous anger of the guns.

Only the stuttering rifles' rapid rattle

Can patter out their hasty orisons.

No mockeries now for them; no prayers nor bells;

Nor any voice of mourning save the choirs,—

And bugles calling for them from sad shires.

What candles may be held to speed them all?

Not in the hands of boys, but in their eyes

Shall shine the holy glimmers of goodbyes.

The pallor of girls' brows shall be their pall;

Their flowers the tenderness of patient minds,

And each slow dusk a drawing-down of blinds.