Reading Comprehension Strategies: The Neglected Tools. An Experience with EFL Students in a South American Country

Lic. Viviana N.Miglino is a teacher at Instituto Superior del Profesorado “J.V.González” in B.A. Argentina. She is interested in literature and has developed a didactic tool to teach reading comprehension strategies explicitly in class. Current professional interests are leadership and teachers´ training. She  enjoys working with enthusiastic colleagues and students. Email: vivimiglino@gmail.com

Contemporary approaches to reading hold that meaning is created through the interaction of reader and text in which readers make use of certain cognitive and metacognitive strategies to understand what they read. This study purported to find out to what extent reading comprehension strategies were explicitly taught  in class in 3rd year high school, state-run schools in Florida, Vicente Lopez, Buenos Aires, Argentina. The study also explored whether teachers were acquainted with such reading tools and whether the tasks used to check reading comprehension required the use of the strategies in question. Findings showed that reading comprehension strategies appeared as neglected tools in the reading lessons observed. This may have been significantly related to teachers´ ignorance about the point in question as well as some kind of incongruity between what they thought they knew about it and what they actually did in class. This study highlights the need for teachers to better understand the critical role of reading comprehension strategies in the construction of meaning in the reading process, as well as the importance of explicitly teaching such tools to their students in class.

According to Oxford, since the last decades of the 20th Century, interest among ELT specialists has shifted from what students learn to how learning occurs (Oxford, 1990). This interest in understanding the process of learning highlights the paramount importance of teaching reading strategies in EFL learning situations.

Following Oxford´s consideration and focusing on the reading skills in particular, I wondered whether teachers of English are aware of the importance of teaching reading comprehension strategies to their students.

This investigation, therefore, became informed by the following research question:

As derived from the research question, the following hypotheses were also examined:

For years, reading has been considered to be a cognitive activity involving such processes as understanding and interpreting something written or printed. Brown (2001) states that before 1970, research on reading in a second language was practically null, but in that time two approaches were developed. On the one hand, Goodman (1967) and Smith (1971) became the major proponents of the top down, knowledge based or conceptually driven approach to reading, due to the important role that the reader´s intelligence and experience play to make predictions about the data they will find in the text. On the other, Gough (1972) developed the bottom up, text-based or data driven approach, which holds that reading follows a series of stages that proceed in a fixed order from sensory input to comprehension.

According to Nunan (1999), these two approaches seem to be conflicting, contradictory perspectives and he concludes that fluent readers understand texts by an interactive process in which they constantly shuffle between bottom-up and top-down processes. The same view is held by Silberstein (1994), Celce-Murcia and Olshtain (2000).

The two constituents of the reading interaction- the text and the reader- therefore, are equally important in the construction of meaning.

A text is, according to Molinari Marotto (2008), a coherent group of sentences that always has coherence gaps in it, and is made up of three levels, in Alderson´s (2000), Van Dijk´s and Kintch´s (1983) view:

Cubo de Severino et al (2008) state that sentences combine with other sentences to form texts. For a text to be constructed as a unity, it must contain expressions that are interpreted thanks to the interpretation of other expressions in the text, thus establishing cohesion in that text.

The vital importance of cohesive devices in the text coherence was signalled by Halliday and Hasan (1976), who provided a taxonomy of the former which included such features of the language as conjunctions, ellipsis, lexical cohesion, reference and substitution.

Texts belong to different types, and when the reader first  encounters a piece of writing, he or she anticipates what type of text it is by observing the paratext and  trying to imagine what the text is going to be about. Alvarado (2006) classifies the elements of paratext into iconic (illustrations, design and graphics), and verbal (title, dedication, epigraph, prologue, index, notes, bibliography, glossary and appendix), all of which constitute, she explains, ancillary tools for text comprehension.

Text construction is structural i.e. Different types of text follow typical structures that help determine what text type they belong to. Therefore, the benefits of text type recognition are widely acknowledged among reading researchers. Several authors state that knowledge of structure is clearly important in efficient and strategic processing of text (Goldman and Rakestrau, Alexander and Jetton, Pearson and Fielding, Ciapuscio) Yet, due to the large number of texts that exist in the world, some sort of grouping is necessary to analyze the differences among them and to understand the various strategies the reader uses to interact with texts. Following the current psycholinguistic text topology Molinari Marotto (2008) and Cubo de Severino et al (2008) distinguish four text types of texts - Argumentative, Narrative, Expository and Instructive texts-

Writer and reader are, in Widdowson´s view (1978), both participants in a dialogue constituted by the reading of a text, where the intention of the writer (persuasion, declaration, suggestion and so on) has to be understood by the reader. A text is, then, coherent, when the reader can interpret the writer’s objectives.

Van Dijk and Kintsch (1983) try to explain the reading comprehension process, by stating that the text is not the only source of information for the reader; they claim that, in order to understand a written piece, the reader draws from the context and from previous knowledge of the world that he or she keeps in his or her memory.

Silberstein (1994) explains that the schema theory emphasizes the role of preexisting knowledge (a reader’s “schemata”) in providing the reader with information that is implicit in the text.

There are two categories of schemata or background knowledge:  formal schemata, which consists of our knowledge about the structure of discourse and the conventions that are related to it, and content schemata, i.e. the knowledge of people, the world, culture, and the universe.

The interactive approach to reading describes that cognitive ability as a process in which both text and reader have much to contribute. It is in this process that readers make use of certain strategies to understand the texts they read.

representation of the means to reach an aim”. More recently, Cubo de Severino et al (2008) described discourse strategies as shortcuts or ways to process discourse, which have been systematized after frequent use, and are kept in the reader’s mind as the most effective way to read. 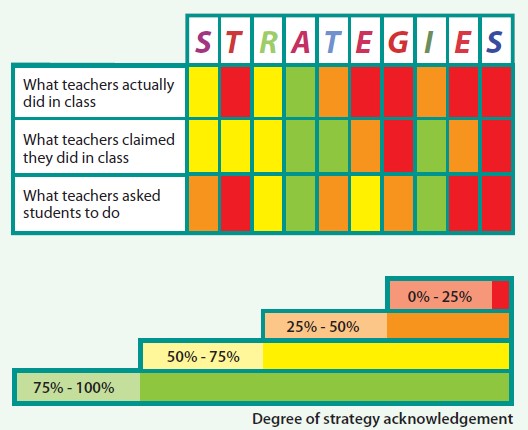 When it comes to observing the results of reading, Alderson (2000) Brown (2001) and Nuttall (1996) admit, any single technique will prove to be partial in the picture it can present of that activity, due to the private, silent and individual nature of the reading process and understanding.

In an attempt to sort such techniques out, Nuttall (1996) and Brown (2001) provide different, though related, taxonomies.

Nuttall (1996) explains that given the private nature of the reading process, questions are helpful to gain access to what is happening in the reader’s mind according to their grammatical form, she distinguishes among open-ended questions, multiple choice questions (MCQs), and true/false (T/F) questions.

Yet, Nuttall claims, questions can also be classified “according to the skills they require from the reader, [which] is much more important than their grammatical form”.

In order to sort out these tasks, she proposes the following taxonomy:

The participants of the study were fourteen groups of third year high school students and their teachers, belonging to the four state-run schools in Florida (a neighbourhood on the outskirts of Buenos Aires).

The number of students in these groups ranged from 8 to 19, with an average of 14 students per group. Each group had two weekly clock hours in English. The young people who attend these schools belong to low middle class families in the neighbourhood, and about 10 % of the students have a temporary job.

A descriptive investigation based on a multimethod approach:

Qualitative and quantitative analysis of the data collected from 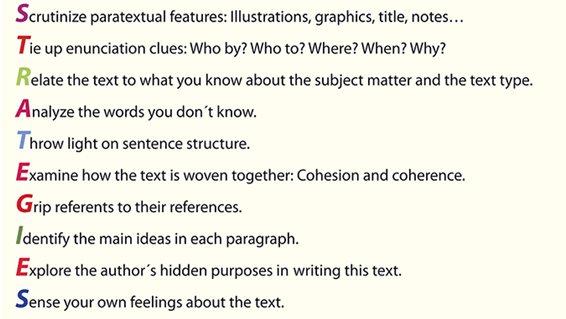 Based on the analysis of the data which were collected through non-participant observation, questionnaires for teachers and reading task analysis, the hypotheses under examination proved as follows:

All in all, we can conclude that reading comprehension strategies appeared to have been neglected tools in the English reading comprehension lessons of the students who participated in the investigation. Although a few teachers seemed to be acquainted with some of the strategies under study, the extent to which they were made the best of in the process of bridging the gap between texts and readers was far from being the necessary one. In other words, it appears to be the case that a lot more meaning could have been constructed between students and texts in the reading lessons observed if reading comprehension strategies had been put at readers´ disposal. Therefore, the text-reader interaction could have been much more successfully accomplished. Because after all, as Samuel Jonson wisely puts it, “A writer only begins a book. A reader finishes it (Martin, 2008)”.

Unexpected by-product of this investigation

During the process of the investigation I realized that by elaborating the instruments I was presenting a series of strategies which can be taught to foster reading comprehension. Teachers did not seem to teach comprehension strategies explicitly and there was a need for it. The question is: How could they do that?

Creativity gave me the answer: By providing them with this pair of gloves to teach ten reading strategies which tackle the text in its three constituent levels: The syntactic level, the semantic level and the pragmatic level, and by encouraging them not to abandon the text until they make sure all three levels of text interpretation have been dealt with.