Mojca Belak is a lecturer at the Department of English, University of Ljubljana, Slovenia and a teacher trainer at Pilgrims, specialising in creativity in language teaching and naturalistic intelligence. Email: mojca.belak@guest.arnes.si

Although nature is all around, many rarely notice it. Children, especially when they are very young, seek to experience nature, and parents often encourage this. It is only later, when children go to school and learn to read and write, that they become detached from the natural environment and begin to live more in their heads than in the present moment. As they become more digital and enter the world of virtual reality through computer games, the connexion to nature becomes even weaker, but is never truly severed. Even adults who seem to have lost touch with nature seek window seats in restaurants, prefer hotel rooms with a view, and like picnics and barbecues. These are all signs of Naturalistic Intelligence, one of the two additional intelligences that Howard Gardner proposed after the publication of his Frames of Mind. Naturalistic Intelligence is about understanding nature and the place of humans in it, it is about being good at understanding Naturese, the language of nature.

This article is a description of a lesson that can bring nature into a face-to-face or virtual language classroom through the magic of storytelling. It was shown at the first Pilgrims Online Café on 23 January 2021.

Ask students to take a sheet of paper (A4) and fold it so that they get six parts - three squares in two lines. Ask them to label the squares with numbers from 1 to 6. You are going to tell them a story in six parts and you are going to tell them every time the next part starts. While you are telling the story, students are drawing what they think is important. They should not worry about the quality of their drawings – their illustrations will just help them to remember the story better, and no one else will see them unless they decide to show them to others later when they work in breakout rooms or in groups.

We are in Australia, in a national park north of Sydney. It's September 1994. Imagine a young botanist and explorer, a National Parks officer, walking in the wilderness. The weather is fine and the temperature is just right. The days are getting longer. His name is David Noble and he is in his late twenties. Picture him in your mind. He climbs down to a secluded gorge and sees something that he will never forget. In front of him there is a strange forest of unusual trees. The tallest are almost 40 metres high, and their trunks are about a metre thick. The trees do not have leaves as we know them, and they do not have needles either. The trees look a bit like giant ferns with green branches.

David is deeply impressed by the unusual trees. There is a light breeze - imagine the rustling of the branches in the wind. He picks up a dry branch from the ground and puts it in his backpack. He lingers under these strange trees for a while, then continues his hike. Later, when he arrives in Sydney, he tries to find out more about the mysterious trees. He shows the branch to his fellow botanists, but no one can identify the tree. No one has ever seen or heard of such a tree.

Finally, David comes across a colleague who shows him fossils of a tree that grew 200 million years ago. The branch of the unusual tree is almost exactly like the fossil. What David has found is like finding a family of dinosaurs still alive. In the Jurassic period, these trees were widespread, but now they are almost extinct. Almost, but not quite. 65 million years ago, they were not wiped off the face of the earth. Instead, a few of them huddled together in the gorge that provided a good climate for them to survive. And that's exactly what they did - they lived on and grew on, and survived.

So there are ancient dinosaur trees in Wollemi National Park. The Park springs into action - they know that they have to protect the find from tourists. They must keep the location of the trees a secret. Only few researchers are allowed to see it. They are taken to the gorge by helicopter, and before they get there, they are blindfolded. Crowds of visitors would no doubt destroy the trees, but natural disasters can also threaten them. In November 2019, the largest forest fire ever recorded in Australia came close to the grove, but fortunately did not reach it.

The tree is named Wollemia Nobilis, Wollemia after the Wollemi National Park where it grows, and Nobilis after David Noble, who discovered it. Almost all the trees in the gorge are clones, and almost all have more than one trunk. They are constantly growing new trunks from their roots. Most branches grow directly from the trunk and have no further branches. After a few years a branch makes a cone, then stops growing and dies. A new branch grows directly from the main trunk. The bark on the trunk looks like bubbling chocolate - the bubbles are sleeping buds of new branches.

We are now in 2005 and the Wollemia conservation campaign is in full swing. Wollemia seeds and saplings are going on sale. Australian botanic gardens buy them first, later they are sent to botanic gardens overseas. Then the young Wollemias pop up in homes, gardens and parks around the world. In this way people help these ancient trees to spread, and perhaps one day the Wollemias will no longer be an endangered species. Also, those who want to see them do not have to search for their natural habitat in Wollemi National Park and disturb the grove. Instead they can see the trees in parks closer to home. For Wollemias, or Wollemi Pines as they are popularly known, have a chance to survive only if they are left alone. 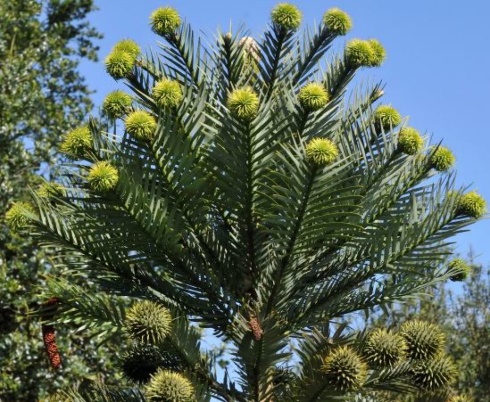 Divide students into smaller groups and ask them to retell the story using the illustrations they have drawn.

You can create a PowerPoint presentation on the same topic using only photographs and show it to the students. They retell the story using your prompts.

Alternatively, students can write important words in the six squares and then retell the story using those words.

Finally, students can write a haiku, a short Japanese poem that consists of three lines and does not rhyme. The first and last lines have five syllables and the second has seven. Students will find it easier to produce a piece of "poetry" if they already have something in front of them, in this case perhaps the beginning of the haiku: If I were a tree. The following one is mine:

If I were a tree

I'd tower high in the sky

A proud spruce or oak