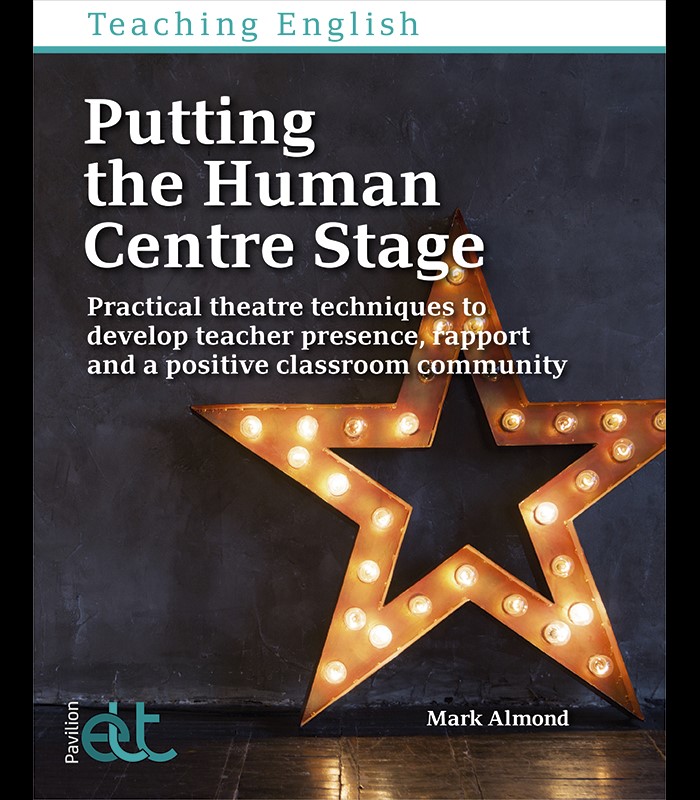 Following the rational and respectful habit of German reviewers I intend to first tell you a little of what the book says about itself before offering you my bounded, narrow, and also wide-ranging  view of it.

Quotes from the book

The subtitle on the book cover is: Practical theatre techniques to develop teacher presence, rapport and a positive classroom community.

The back cover has this to say:

This book focuses on the hidden skills within a teacher’s repertoire, such as their interpersonal skills, classroom atmosphere and group dynamics; the importance of the teacher’s voice; non-verbal communication; the general affective aspects of teaching; motivation; rapport; teacher’s energy and motivation; improvisation and preparing for the unexpected. By covering these areas this book helps you enrichen (sic) your teaching, makes you reflect on your approach and encourages you to build a positive classroom community.

Chapter 1 Introduction  ( includes “ the thinking behind this book”)

Chapter 2 Insights from other fields

Chapter 3 The ghosts behind the blackboard

Activities( to be used by the teacher trainer)

There are 36 of these and they form the main body of the book.

No 6 is headed MEMORABLE TEACHERS and is derived from Ephraim Weintraub’s conviction that you cannot train a young teacher without helping him/her to exorcise the ghosts of past teachers. Here is how Almond leads a trainee group into this topic:

“ Standing a short distance in front of you is a figure. The person is slightly out of focus. Slowly they come into focus and you can see that it is one of your teachers from the past who has had a strong positive influence on you. Etc...........

After severalmore physical exercisesthe group comes together in plenary and discuss what they feel the influence of these ghosts is in their own teaching practice classes.

( this is half the length of Almond’s exercise procedure)

My personal evaluation of  this copious and many-sided book

Back in 1976, when Pilgrims had only just crept into existence four of us put together a drama focused book which the lead author, Lou Spaventa , called TOWARDS THE CREATIVE TEACHING OF ENGLISH. I was very embarrassed at what I felt was Lou’s US brashness in making such a cheeky claim.  How times have changed for the better i n EFL when Mark can unashamedly put forward an assertive title like PUTTING THJE HUMAN CENTRE STAGE. He dares to do this despite being a senior lecturer at a respectable University and perhaps surrounded by that odd breed, “applied” linguists.

I rejoice that a senior university lecturer  in UK can , in 2019, speak openly of the full human being. How true is this of university EFL departments  from Lisbon to Helsinki ( Helsingfors) and from Dublin to Bucharest?  I know some places where “ touchy feely rubbish” is way beyond  the pale of acceptability.

I rejoice that a man who can talk about classroom reality as it is does not quietly get given a cataloguing job in the library o f the university.  Here are some of the iffy behaviours Mark  suggests can happen in any normal class:

going to the toilet without asking for permission

slumping forward on the desk

rocking backwards and forewards on a chair

talking when the teacher is talking

gazing out of the window

having one earplug in

tapping or clicking a pen

I  would suggest that in this book you have the smooth and elegant work of a masterful methodologist.

Here is one more example of this elegant methodologist at work:

Material: Pre-prepared nursery rhymes in case the participants don’t know any such rhymes.

Aims: To raise awareness of the versatility of our voices in terms of prosody and  phonology in general and to provide practice; to consider why and when the teachers might alter the quality of their voice.

Pair the participants. Ask the A s to choose a nursery rhyme that is clear and easy to act out like “London Bridge is Falling down” . Explain that A is the conductor and that B says the rhyme according to A’s stance and hand movements

Here are example gestures that the conductor may use to get their partner to modulate their voice in a range of ways:

Calming palms down= a calm  voice

The students feedback to the plenary what they reckon they have learnt. Ask them what this sort of stuff has to do with teaching?

I hope above you have enough evidence to back my feeling that Almond writes as a seasoned methodologist. However there are some amazing gaps in the sources Mark Almond could have drawn on and led us to.

In Almond’s list of feature films about a teacher’s life he includes Etre et Avoir which is the most succinct definition of the life work of Bernard Dufeu, the main developer of Language Pyschodramaturgy.  Dufeu  followed in the footsteps of Willy Urbain who, in a flash of inspiration  realised that the the work of Jakob Moreno, creator of psychodrama, could be softened and moulded to teach a foreign language from zero.

Mark was in Canterbury and at Pilgrims at the time when Bernard Dufeu  was in the offing, running deeply affecting workshops for our staff.

In the mid1990’s Alan Maley , working as general methodology editor for Oxford University Press, encouraged Bernard Dufeu  to write  Teaching Myself ( triple ambiguity). The book also appeared  in Italian , French and German. Arnold could have decided to read it in Gallego which they speak in the North West corner of Spain.

Amazingly, the book I am speaking about is not even in the tiny print at the back of Almond’s book, in the bibliography.

In some ways Almond’s book is a child of  Dufeu’s work and the man remains unmentioned.

In the bibliography Peter Lutzger’s  account of the central role of drama in the teaching done in the Waldorf Schools in Germany and across the world is distantly recognised.  True the Steiner followers do tend to keep themselves to themselves but it more than high time that folk with the Mark Almond mindset had read and disgested  SING ME THE CREATION, by Paul Matthews, a  deeply Steinerian book of  sparkling genius.

I  would be surprised had you not visited my Father’s country. La bella Italia. When there did you chance on the work of Gianni Rodari , eg LETTERS WRITTEN ON A TYPEWRITER,  and a welter of  other titles that sprang from his drama and storytelling work in primary schools up, down and across Italy?

Where does Maria Montessori come in your thinking?  How about Don Milani ‘s special school up in the hills near Florence?

I blame myself that you may not know about my life-long practice of simply writing individual letters to my students. I have been doing this for 40+ years and I find it hard to remember that only a few teachers seem to do the same. This one “technique” has transformed the way I work with students/trainees in a group. The reading of them, each of them, and the answering of them, each one, has transformed my teaching.  Maybe It is time I wrote a book about this simple single idea.

Mark, I admire your book, its vision, its sincerity and its love but it could have so easily  been yet better, broader, richer.  Could it be that you are sometimes a bit in a hurry

Please check the Drama Techniques for the English Classroom course at Pilgrims website.

Please check the Advanced Drama and Improvisation Techniques for the English Classroom course at Pilgrims website.